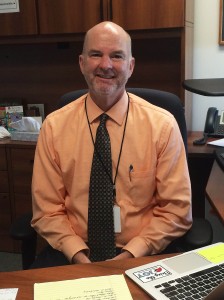 “I thought you said this would be easy,” laughs Kevin Conwell when asked to describe himself in six words. His tie is so tight around the collar of his orange button-up shirt that it wiggles as he speaks. Papers are stacked in piles that cover his desk, and his laptop is halfway open.
He chooses his words very carefully, thinking for quite some time and using a notepad to jot down possible adjectives for at least two full, silent minutes before answering: “Compassionate, empathetic, hard-working, good-natured, even-keeled, and a learner.”
One thing that did not, and should not, make the list is “good at small talk.”
These positive characteristics are exhibited throughout Conwell’s life. As a boy, he played basketball, and he grew up with younger a brother who had Down’s Syndrome, which he says helped him become more compassionate and empathetic.
“Back then, students with disabilities like that were not really included in the mainstream, as they are now. It really gave me an interesting perspective. I think it really made me a better person,” shares Conwell, whose brother passed away about two years ago.

Before becoming Principal of Bozeman High School, he was a student, “drawn to the role of the leader,” as he described.
“You know, being the class president in middle school, being student body president in high school, and then leadership as far as a teacher in a classroom, and then just leadership of a school,” explains Conwell.
Born and raised in Montana and an alumni of University of Montana, Conwell advertises his pride for his home state with framed posters and photos of Montana’s National and State Parks covering the walls of his office. He says he has always loved school, learning, and challenging himself, which is what made him want to teach.
“I didn’t set out to be a high school principal, but I was going to be a teacher and a coach, and I really enjoyed that,” Conwell explains.
But after ten years of teaching, Conwell felt that he needed more of a challenge, and the best way he saw was to move into school administration. He applied for a position as the assistant principal and activities director in Hamilton, Montana, and then became principal of that school three years later. That put him on the path to his current position at BHS, which he saw as another opportunity for a challenge.
“To move up in my field is to get into a bigger school. That means a much bigger staff, much bigger school district. It was really the challenge that drew me to it,” he says.
Conwell says that a typical day as principal at BHS does not actually include working much with the students.
“Unfortunately, there are quite a lot of meetings in a typical day, which is fine, I mean, it’s the nature of the job, but I would much rather be in classrooms working with students and working with teachers,” Conwell explains, readjusting some pens and papers on his desk.
Conwell adds that he’s quite fond of the students and staff at BHS, and especially how they’ve supported him through hard times.
“In the fall of 2014, right about when school was starting, I discovered a lump under my armpit, and I, at first, didn’t think a whole lot of it. But it persisted, it wouldn’t go away, so I got it checked and they kept monitoring it and they decided they needed to remove it, and they did. Even then, I didn’t think it was going to be anything,” says Conwell.
The lump ended up being Non-Hodgkin’s Lymphoma, a form of cancer. Conwell underwent six months of chemotherapy during the 2014-15 school year, never backing down from his duties as a leader.
“Fortunately, I was able to keep working and doing things, but it really zaps your energy. It’s a pretty intense time period,” explains Conwell.
This experience has helped Conwell have a much deeper appreciation for his life, job, family, and friends, and helped him “recognize [his] own mortality.”
“The awesome thing is, I’ve got so much support here at the school. A lot of support really made that possible,” smiles Conwell.
This spring will mark his second year of being cancer-free.
“So far—knock on wood—I’m still doing well and hope that nothing comes up,” says Conwell.