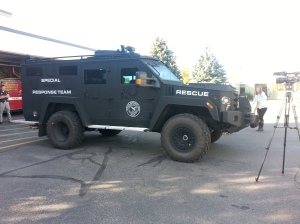 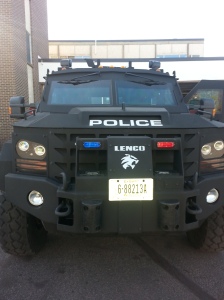 On Oct. 6, the city of Bozeman was finally able to see what all the commotion was about when the Bozeman PD displayed their new Lenco Bearcat G3 armored response and rescue vehicle. Many Bozemanites strongly disagree with the acquisition of this vehicle, saying that we are not in need of a small tank in our county. Bozeman high alumni Birdie Bowie has created a petition on Change.org to remove the Bearcat, which has garnered 1,087 signatures.

“Southwest Montana is home to several anti‐government and/or radical groups such as militia groups, environmental groups, outlaw motorcycle gangs, religious and racial hate groups. Additionally, Bozeman and the surrounding areas are not immune from potential active shooter attacks in our area businesses and schools.”

Captain Steve Crawford of the Bozeman Police Department offered additional perspective on the acquisition of the Bearcat at an open house, Monday, that addressed public concern about the vehicle

“The primary function of the Bearcat is to safely transport officers in a hostile situation, and also to rescue wounded civilians or officers in such situations,” said Crawford.

Captain Crawford also added that although the Bearcat’s initial cost is $250,000, including the training of officers which is paid by the grant, there are no heavy additional maintenance costs.

“It costs about as much to maintain as a regular patrol cruiser,” stated Crawford.

He also said that the goal of the BPD at this point was to dispel misconceptions about the use of the Bearcat. Captain Crawford said that it will in no way be used for crowd suppression, but only for situations in which police officer’s lives are at risk..

The Bearcat will be a shared resource between both the Bozeman Police Department, the Gallatin Valley Sheriff’s Department, as well as the surrounding counties.

The Bearcat is not a weapon, but rather a shield, a purely defensive tool. In the end, it’s far better to have a Bearcat and not need it, than to need one and not have one when the unthinkable happens